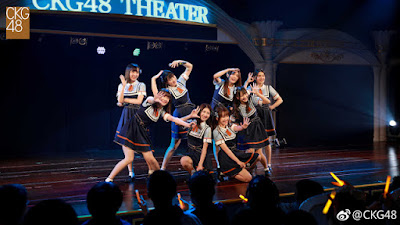 On April 8, 2018, the special show of The 48 Idol Festival CKG48 officially introduced their second generation member numbering 8 people. This proves the truth of creating several new Weibo accounts that have been registered with CKG48.

The number of cases that hit the group made them better select and train the girls to be ready to be a good idol. During The 48 Idol Festival, they performed two songs, BINGO! and Give Me Five.

They will be trained by replacing the members' void during Team C and Team K performances. They will be assessed for progress whether they can become full members of CKG48 and be promoted to the team.

The eight members also made the inauguration of their kabesha photo on the wall of CKG48 Star Dream Theater. Not only that, they also do the act of signing CKG48 theater wall.

They will plant their youth and dreams at CKG48 Star Dream Theater, they want to live the love of teenagers and their fans and make their dreams shine!