The members of SNH48 Group will surely exit the theater or dormitory if going for a walk out. All fans will spontaneously directly do a paparazzi against them.

All that is worn and carried by members will be the spotlight of the netizens, not infrequently they become a fashion reference of female fans. But the funny thing happens when fans do a paparazzi to one of the CKG48 members while they're out.

At that time a member of CKG48 named Tian Qinlan from Team C got stuck out with her friends. She appeared to be carrying a drink and towed by her friend.

However, the attention is not the goods she carries but the shirts she wore. The photos are uploaded by fan accounts and crowded into their laughing stock. 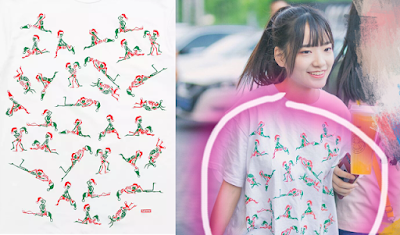 T-shirt that Tian Qianlan CKG48 wear is Supreme Christmas Tee 2017. The shirt has a pair of skulls that have it with various positions.

The image can be seen clearly while paying attention to the image with magnification. Lots of interesting reactions and comments from fans. "The one in the pack is oh ......", wrote one fan.

However, behind the dirtzy picture is the price of the shirt is very expensive that is approximately Rp.1.100.000,00.