Shanghai AKB48's new sister group AKB48 Team SH has been holding their first generation auditions. This audition was held simultaneously with the formation of the group on April 10, 2018 yesterday. The girls in China will compete for some of these AKB48 Chinese member seats. 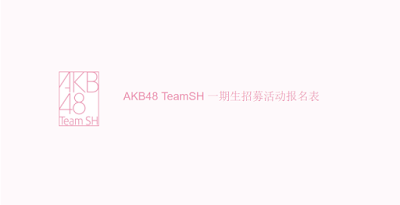 Then what kind of audition system is applied by AKB48 Team SH? How do the terms and procedures and the implementation schedule apply? Let us consider the explanation below.

The first application deadline or application is dated May 22, 2018 at 23:59 Beijing time. Registration is free of charg. Please remember not to do registration more than once. If there is an error in filling in the phone number, please contact email@akb48-china.com. For the provision of photos and videos that do not use a beautiful camera, effects, filters or the like.

After passing the candidates will undergo the second stage of the test is the interview. Interviews will be held in several cities in China such as Shanghai, Beijing, Guangzhou, Shenyang, Chengdu, and Wuhan.

Those who pass the second phase will be notified in late May to early June. AKB48 China also reminds that the cost of accommodation and transportation during the audition is borne solely by the applicants.

The third stage of the audition is the interview, for this interview will only be held in Shanghai City. To schedule its own implementation is still not announced. After this third phase passes, the final stage will be done that is the final interview before officially becoming a member of AKB48 Team SH.