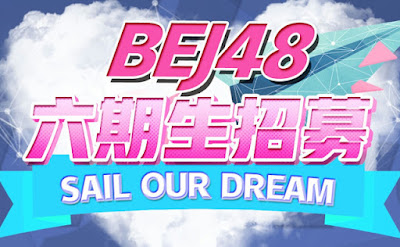 The BEJ48 has entered its second year of formation on April 20, 2018. Entering the number two this year, the 48-based group in Beijing has many members who are divided into Team B, Team E, Team J, and Trainee.

For the year 2018, BEJ48 opened auditions and looking for members of the sixth generation. The theme chosen by BEJ48 in searching for new seeds is "Sail Our Dream".

Previous five-generation auditions have been held some time ago, while the new four generations will be announced at the Next Idol Project trainee show.

Audition Generation 6 is the first time for the BEJ48 not to do it with other sister groups. Since the first generation BEJ48 held auditions simultaneously auditions SNH48 and GNZ48. Though yesterday SNH48 just opened the audition of the eleventh generation members.

Here are the conditions that must be adhered to register audition second generation BEJ47: