On April 4, 2018 yesterday, NMB48 held a graduation concert of one of its members namely Yagura Fuuko in Orix Theater, Osaka. 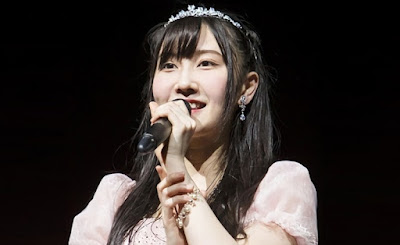 In a concert titled 'Onaji Sora no Shita de [同 じ 空 の 下 で / Under the Same Sky]', Fuuchan announced that she would retire from the entertainment world.

Fuuchan said, "Being under the same sky (with fans), I feel I can take a new step."

Yagura Fuuko has been in the entertainment world for about seven years since she joined NMB48 in May 2011.

"When I joined NMB48, I was not good at dancing, it was hard to smile, and always hide behind someone.Thank you so much for finding me like that. I'm happy to join NMB48.Can meet you all is a treasure to me Thank you for making me feel this way. "

Yagura Fuuko graduation theater performance is scheduled to be held at the NMB498 theater on 10 April 2018.