During the announcement of JKT48 Academy, the headmistress of Devi Kinal Putri has said that later in the venue will be divided into two classes, class A and B. 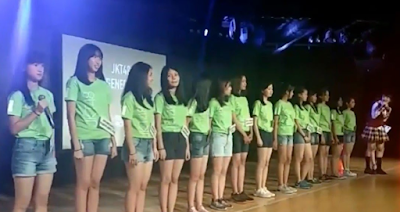 Members of the 6th generation of 14 people immediately entered the stage and were introduced. They wore pride shirts of every generation that were light green.

The following is a list of the names and ages of 6th generation members of JKT48.

Of these 14 members, some are members of Team T JKT48, Eve Antoinette Ichwan. She is the one who has the Ichwan clan behind the name, Ariela Calista Ichwan.

In this generation 6, one of the members there who have Japanese descendants of Erika Ebisawa Kuswan. She is a friend of Zahra Yuriva ex-JKT48.