'Next Idol Project' to be debut setlist for BEJ48 4th generation 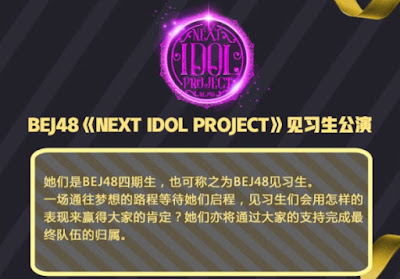 Generation 9 SNH48 has been announced in advance, now they can be found in the formation of Team FT.

While Generation 4 GNZ48 has joined the members of trainees of the third generation group. BEJ48, SHY48, and CKG48 have not yet released the names of the generation members who passed the joint auditions.

This special birthday celebration, BEJ48 announced its debut for this 4th generation member. They will debut in a theater show titled 'Next Idol Project'.

It is a new step for BEJ48 to apply the Trainee members system in order to produce serious girls with their dreams. Shonichi stage Next Idol Project will be held on 28 April.