The story of Wang Feisi After Withdrawing from SNH48 in 2013

Still remember with the members of SNH48's first generation? Well, you must be very familiar with the pioneer sister group AKB48 in Shanghai (formerly). Certainly many have resigned and graduated from SNH48. 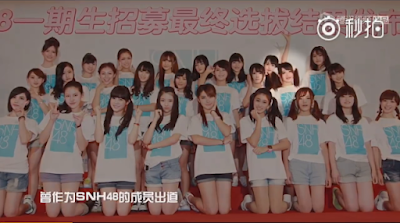 Tang Min like Mayuyu oshi a million people, and there are still many International wotas who like with SNH48 when this group was aged under five.

Difficult and uncertain yet to move forward, many of these genes slowly one by one resign prematurely.

At that time SNH48 still wearing a pink legend seifuku that worn on and there in two MV of their first single song. So what underlies Wang Feisi's resignation?

After being unnoticed by fans, she appeared in a documentary released by Tencent to welcome PRODUCE 101 titled 'Nu Tuan 女 团 / Girl Group'.

In the documentary Wang Feisi revealed that she resigned from SNH48 on the grounds of her education at the Beijing Film Academy.

However, on SNH48's official website said that Wnag Feisi had committed a violation and was dismissed from the group.

Currently, the girl known as Feisi works in a maid cafee in Beijing. On the sidelines of her busy lecture she also had to work hard to add money to meet her needs.

After working in cafe A, she and her friends continue to work in cafes or other stores that require their services and entertainment.

To entertain the otaku fan at the maid cafe, Yifan with her friend Sometimes they have to go around the city looking for more money. Not smoothly, she and some friends are often rejected when they have come all the way and are looking for work.

She is also a friend of Yang Yifan who is also her profession, but Yifan has now joined the BEJ48. For more details, see the video story of Wang Feisi below.