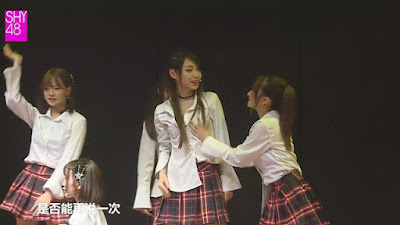 Funny moment came from SHY48 idol group during the performance of senshuuraku theater Team SIII 'Tiancai Shaonu Rijie'. When entering into the song Innocence, fans hyped with the behavior of one of its members namely Fu Ziqi.

While dancing with Wang Shimeng formation in the middle, she suddenly squeezed breasts of girl who often together Mengmeng it.

The fans who watched immediately screamed hysterically when Fu Ziqi sillyly did that. When Wang Shimeng held quiet, continued singing then smiled and looked at Fu Ziqi who also smiled at her.

It's an exciting entertainment especially for male fans. This incident then created a moving image (GIF) and then uploaded by fans to Weibo social networking.

Some fans said that Fu Ziqi was exasperated with Wang Shimeng's breasts. There is also a comment that Fu Ziqi is a reliable person. The photo is flooded with funny and unique comments from fans. Intrigued by the action carried out by Fu Ziqi? Check out the following GIF photos.