A BEJ48 fan permanently blacklisted after taking a photo during theeater

Again BEJ48 should receive naughty action from fans. Previously at BEJ48 Star Dream Theater, an unknown man ruined the members of Team J. This time during the Team HIII theater show titled 'Pengran 33C' at BEJ48 Theater, there is a fan who screwed up the show on Friday (04/05) / 2018). 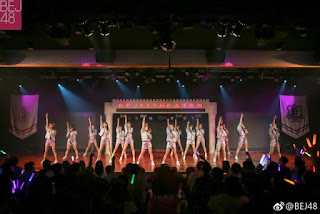 Known to the fans are quietly carrying a camera and taking photos during the show, switching seats then hitting other audiences and causing a fight. Security theater immediately swiftly caught the fans who committed the violation even had time to argue. Through the official website BEJ48 issued an announcement related to fans who perform the reckless action.

"For fans with ID 'Wsi' permanently their account has been shut down. Not allowed to purchase merchandise and any tickets on shopping sites. Prohibited from entering Star Dream Theater (apply SNH48 GROUP). Reason for punishment: stealing (photographing), making a mess, hitting people, switching VIP seats in private.

For fans with ID 'snh48053002007' their account will be held for two months. The reason for punishment: VIP seats move privately."

From that event BEJ48 Star Dream Theater will increase security and supervision to protect the safety of the members. The BEJ48 also hopes fans will obey the rules strictly.