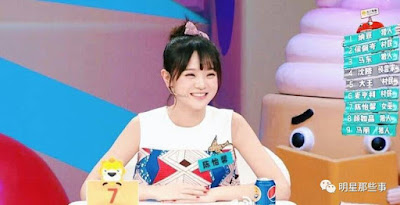 Chen Yixin SNH48 has been rumored to have resigned by the end of 2016. She was diagnosed with depression or depression when becoming a member of the SNH48 group. Though at that time her name was raised by the company for following one of the famous variety show in China.

This cute girl reappeared shortly in one of Tencent's reality shows titled 'Nu Tuan (Girl Grou)' when interviewed by her sister Chen Yifan who will follow PRODUCE 101.

Dudu, greeting name Chen Yixin back sticking out and discussed by the net citizen because spotted perform in one of the musical theater in Shanghai. Yixin has participated in several performances at MiWei's theater.

Chen Yixin's temporary assumption has entered into the management of MiWei and hopes the girl immediately complete her contract with STAR48.

Currently Chen Yixin is trying to terminate the contract with the company. Chen Yixin reportedly suffered a fine of 50,000 yuan or about 7,7k USD. That's because Chen Yixin does not run her activities at SNH48 until her contract runs out.

It is rumored that MiWei will pay Chen Yixin's contract, but some say her parents will pay her.