In the other words HKT48 Miyawaki Sakura graduation imminent

Through its official game, HKT48 member Sakura Miyawaki announced to fans that the event 'AKB48 Group Senbatsu Sousenkyo' this year will be the last Sousenkyo event she followed. 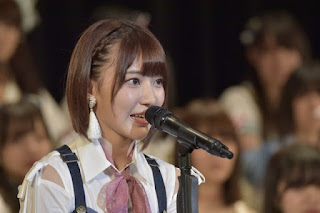 Quoted from Arama Japan, Sakura's reason to follow AKB48 Group's annual event is to make herself better known by many people.

While the reason she is still following the event Sousenkyo in this year, Sakura explain it for the sake of HKT48. Sakura worried about HKT48's achievements in this event without her presence and Sashihara Rino [Including Haruka Kodama who did not participate due to hiatus of all activities].

Sakura said, Sashihara Rino's victory at the Sousenkyo event is the reason why the HKT48 members are proud of their group. Sakura wants the "queen" crown of Sousenkyo that is currently owned by Sashihara Rino to move to her and keep the crown from seizure of other AKB48 group member. In addition, Sakura says, being No.1 in Sousenkyo is not just for her, but also for the group as well as the fans. To that end, Sakura told fans that she wanted to be No.1 at her last Sousenkyo event.