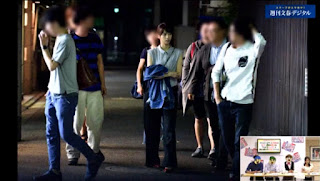 Bunshun double strikes tonight, first of all they released Shida Manaka kissing photos related to her scandal last month get her suspended for at least a month.

In the same night they released new in, Nanase Nishino dating scandal exposed and streamed via Twitter. Nanase dating with a man known as Asahinagu Director, the stage play which involves her and others Nogizaka46 members. Also, this related to few months ago when her first scandal exposed.