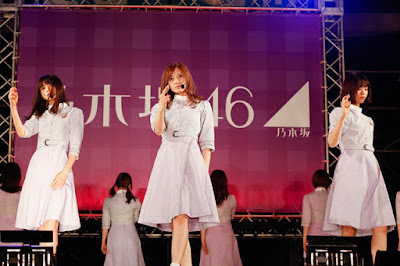 Holding a birthday concert in two places for the first time, Sakurai Reika commented, "What kind of situation is this? Eh, in two stages at the same time? What is this possible to do?", While Nishino Nanase commented, "Does this mean member will go back and forth in these two stages? ".

At the end, Sakurai delivered the message, "No matter what the concert at the two stages is when it comes to a new thing that has never existed so far, please come and see our performance later."

In addition, in this handshake event was also announced details of the schedule and location of the concert 'Nogizaka46 Manatsu Zenkoku Tour 2018' in Fukuoka, Osaka, Aichi and Sendai with the target audience mobilization of 346,000 people.