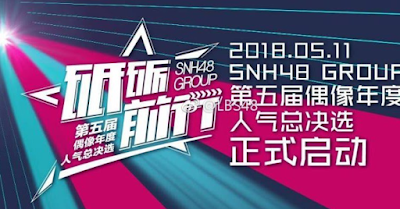 Although it has not been announced the fifth SNH48 election will be themed "Dili Qian Xing (砥砺 前 行)". Those words have a meaning in the English, "Continue Forward".

SNH48 will officially announce the fifth senbatsu sousenkyo tonight (11/05/2018) along with their latest EP titled "Senlin Faze" or Rimba Law. This event will be followed by five idol groups SNH48, BEJ48, GNZ48, SHY48, and CKG48