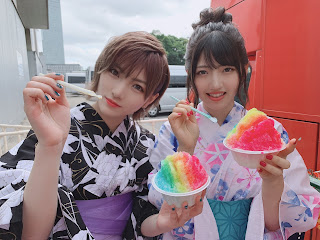 AKBB48 member Murayama Yuiri has announced her graduation from group.

This was announced by Yuiri Murayama at the Team 4 today's theater performance.

Regarding her graduation, Yuiri said, "I have done many things (during AKB48), there is nothing to regret, and in I decided that this year I have to graduate from AKB."

About the time of graduation, Murayama Yuiri has not yet decided and will be announced later.

Murayama Yuiri joined AKB48 in 2011 as a Kenkyuusei group. Yuiri then was promoted to Team 4. Did she really graduate because of dating scandal? Yes, it was, she always with Okada Nana as they are best friends.