AKS hold an emergency meeting involving 338 Japanese AKB48 Group members. They were talking some important thing during this event. 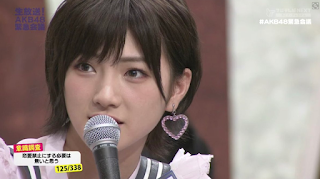 In the middle, AKS asked members by Anonym forbidden question poll system. As the results in a combined category question, majority of members think no dating rule is unnecessary, while half of them want to keep being in spotlight even after scandal, Sashihara Rino inspired them.

AKB48 member and STU48 captain Okada Nana says, "Our group have lot of romance songs, and to understand it fully we can fall in love, or having a one sided love. It’s fully depend on our professionalism wether we will date someone or not."

Whilst Tanaka Miku says: "Why are you even in this 48 group if you are just thinking of doing a scandal.. whats the point?"

Mikurin adds, "I don't understand how 33 members think they still deserve attention even if they get in a scandal. Our seniors have lived following rules like the love ban. Thinking about the feelings of the graduates who faithfully kept it to the end, I would be sad."

Ogino Yuka added, "You wouldn't be interested in dating nor scandal when you're being an idol anyway. There are so many great things to explore and I have no time for dating."

New rule has been approved such like:
Juri Rule: Captains or leaders no longer have to take 1 for the team in buying.
Mirurun Rule: some of the girls dont even greet each other anymore and make eye contact that shiroma miru had to suggest that this be a rule again.