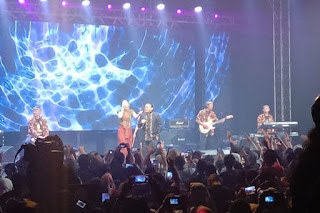 In this concert, the man, nicknamed The Godfather of the Broken Heart, invited two guest stars.

In a press conference held at Fermo Lounge and Bar a few hours before the concert, Didi - another mix of musician's nickname - revealed the number of songs and who he would be invited to on stage.

"Two of them will feature Sisca JKT48 and Cita Citata." he explained in a press conference on Friday.

But, the man born in Solo did not mention the details of the song that will be brought along with these special guests even though a series of hits such as 'Stasiun Balapan', 'Ambyar', and 'Show off Bojo' certainly played on the stage.

Didi also believes, the audience will be dominated by millennial generation.

And even though the songs glance in Javanese, they will show high enthusiasm.

"The arrangement of my songs is unique. The intro most of them are singing. That's why millennial kids like it," Didi said.

Moreover, to bridge the millennial generation with Didi Kempot, Highway Live as the organizer of the duo DJ from Bandung Feel Koplo as the opening artist.

"I am very happy to be able to get the opportunity to work with Highway Live, which has provided an exclusive and up-to-date concept for my performance this time. This will be an energy for Ambyar's friends (as Didi Kempot's die-hard fans)," Didi concluded.

"I want to call Siska JKT48. I should be my child," Didi said jokingly.

"Good evening, friend Ambyar," Siska said, coming out from the side.

"We're going to leave it," Siska shouted, greeted by a loud boisterous audience.

Didi opened his performance with the song "Sewu Kuto" at 20.30. Then proceed with "Layang Kangen", "Banyu Langit", and other songs.