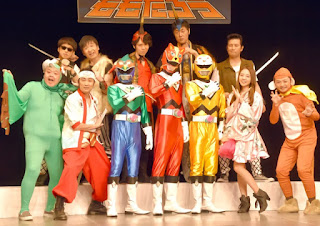 'Momotarou' will be Kawamura's first stage drama job after his graduation from Nogizaka46.

The stage drama 'Momotarou' is a stage play lifted from a story that has been popular in Japan with added elements of action and comedy in the story. This stage drama directed by comedian NON STYLE Ishida Akira who also plays Momotarou.

Regarding the role of Kawamura, the director of Ishida commented, "If told by the original, there is only the story of grandparents ... but in this stage drama there will be a strange girl figure kawaii.Not another player who says he kawaii, but himself who always say" kawaii "." Hearing this explanation Kawamura commented, "Eh, how is this? Okay, I'll do my best."

The stage drama 'Momotarou' will be staged starting July 23 ~ August 10, 2018 at Lumine the Yoshimoto, Tokyo.