Fei Qinyuan SNH48 has been involved in a date scandal with a tomboyish woman on June 5, 2018. She has apologized to the fans for her mistake. Fei Qinyuan's name is now included in one of the members of SNH48 who may have a sesual orientation disorder to lesbbiians. 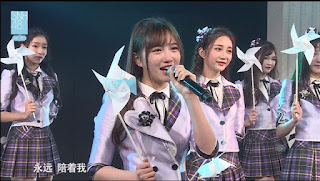 It turned out to go with fans is often done by Fei Qinyuan. It makes fansclub furious. Later that day, they officially canceled a fundraiser or donation for Fei Qinyuan for the fifth sousenkyo this year. Even though funds have already collected as much as 1,033,114.34 Yuan (or ± 2 billion rupiah), fansclub will still return to fans who have made donations.

The donation will be refunded from June 9, 2018 yesterday, so it's almost over. Fei Qinyuan fan club chairman and management will be replaced and handed over to the new one after the refund. Fei Qinyuan may be downgraded in the fifth Sousenkyo senbatsu next July.