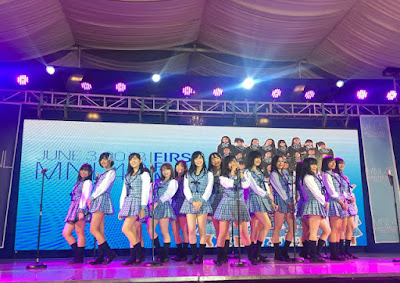 To enliven this event, MNL48 released the first photopack for their first generation members. In addition to ease of ticket purchases, MNL48 updated their smartphone app to 'MNL48 Fan Club App'.

Then next the introduction of Senbatsu, Under Girls, and Next Girls. Fans were also entertained with a game titled Pick Pack Ponk made to enliven the event. Then there was the appearance of senbatsu MNL48 bringing the song 'Heavy Rotation' which is certainly in the Tagalog version. The first position sousenkyo yesterday that Shekina became the center of this song, which is rumored to be the first single MNL48.

The third song is the Sakura / Sakura no Hanabiratchi Flower Petals. All songs are officially performed in Tagalog. The song was performed by all members of MNL48. The members who sang this song were seen there who shed their tears. By bringing this third song, it means that they have ended their first fan meet event.