SNH48 Fei Qinyuan dating with her own fan 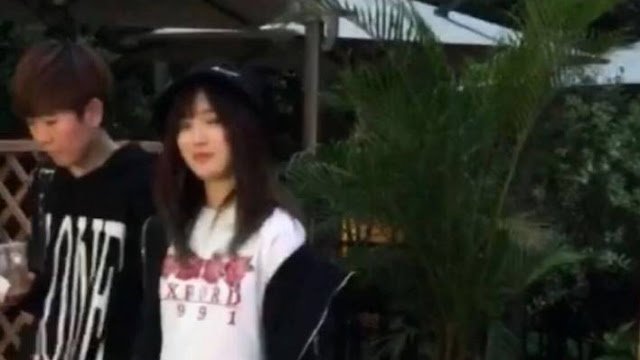 One of the members of Team HII SNH48, Fei Qinyuan is being hit by slash. Because the girl who often called Yuanyuan is caught dating one of her fans. This is known through the videos that are spread out in Weibo's social media. In the video, a woman looks a lot like a fifth generation member beside a guy in a black jacket.

Although fans know that it may be true Fei Qinyuan, but it is still questioned its validity. But from some photos can be concluded that the girl in the video terseut Fei Qinyuan SNH48. Here is some evidence that the rumors are true facts.

From the picture above looks the girl beside the man has a similar bangs Fei Qinyuan. Second, the worn jacket is the same as the one previously worn by Fei Qinyuan. The three men in black jackets have been seen coming to the HII Team Theater show where Fei Qinyuan performed on the stage.

If it is true that Fei Qinyuan is involved in a scandal it is certain he will experience downgrades in sousenkyo later. It is the same as that experienced by Wu Zhehan who has also been involved dating fans. Wuzhe had to experience the bitter pill not get a rating when previously she was ranked one aka the center senbatsu.

Fei Qinyuan update:
Moments ago, Fei's fan community terminated its support for Fei Qinyuan's running in the #SNH48 Senbatsu 2018. It's still unclear whether the officials would expell Fei Qinyuan or not.