Member NMB48 Ando Erina has announced her graduation from the group. This was announced by Ando during Team M theater performance held July 10, 2018. 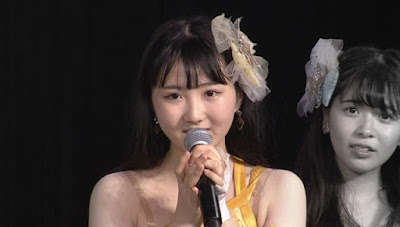 In the announcement, Ando said, "There's something I want to tell you all, I, Ando Erina, will graduate from NMB48."

Regarding the reason for her graduation, Ando said, "Until now I have been trying to reach the highest place in NMB48, but lately I started thinking about what I want to do in the future, so I decided to graduate and concentrate on my education. "

Regarding her graduation schedule, Ando revealed, "I have not decided on my graduation theater performance schedule, but it is planned to be held in August so I will not participate in the tour announced some time ago, but I still want to work together as Team M until the end , I will be very glad if you continue to support me to the end, Yoroshiku onegaishimasu. "

Ando Erina joined the group in May 2015 as a member of Draft Generation 2. And at the 'NMB48 Arena Tour' concert on October 12 last year, Ando was promoted to Team M.