TPE48 set to debut in August at Touch The Japan event. This was announced on the official website of the Japanese cultural event in Taiwan. Scheduled TPE48 will hold a special performance for two times on August 24th. TPE48 Entertainment's troubled financial crisis resulted in the premiere of TPE48's premiere debut. 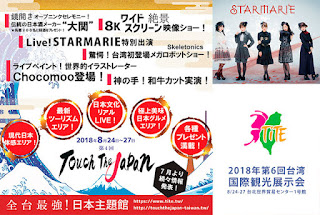 Promotional image of the show featuring TPE48 in the official Touch The Japan store was removed unexpectedly. Earlier TPE48 members appeared in the top promotional picture that has now been replaced with the Japanese idol group itself namely STARMARIE. Even special live special promotional images from TPE48 have now disappeared. AKB48 fans in Taiwan provider of AKB48 Group illegal live streaming, ATC has notified beforehand about this.