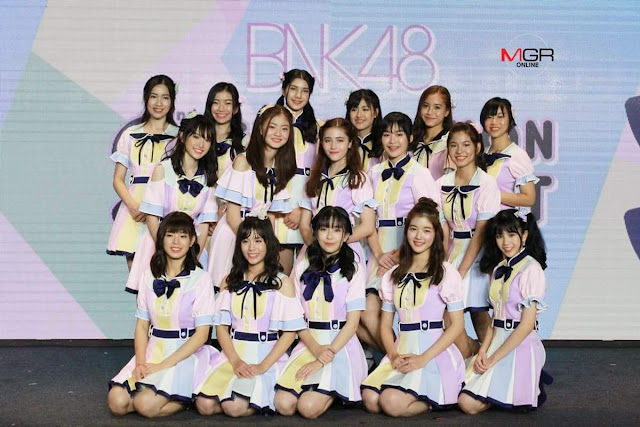 This event is held free by BNK48 so it invites fans freely know members of the second generation. Some of the existing BNK48 songs are delivered nicely by 27 second generation members. Even at the end of the show there was an announcement from the General Manager of BNK48.

The fans' voices culminated as the second generation members introduced themselves. It was the first time they had an introduction in front of fans. Most members of this second generation already have their own fanclub because they are already known through social media first.

After the introduction of the general manager of BNK48, Shihainin announced that the activities of the second generation members in the group had already begun.

They will follow the handshake of Shonichi's second single festival on August 18-19 and the 2nd special of RIVER's first album. Secondly, they will have a show at BNK48 The Campus scheduled every Friday afternoon and an additional announcement of the BNK48 show on Sunday afternoon. In addition, they will start again at BNK48 Digital Studio starting tomorrow July 18, 2018. Generation 2 BNK48 will also perform at the Japan Expo Thailand event that changed to Nippon Haku Bangkok on 2 September.

After the general manager stepped out of the stage, the video containing the re-announcement aired. The announcement contains the first senbatsu and title song of the second generation members which will be the 4th single coupling song of BNK48. The song titled 'Tsugi no Season' or Next Season will be brought by 16 elected members (senbatsu). They are New, Bamboo, Panda, Kheng, View, Myyu, Mewnich, Fond, Gygee, Fifa, Deenee, Juné, Ratah, Stang, Niky, and Wee. The Senbatsu Center will be taken by Mewnich. This song was first performed by senbatsu in this debut show. The members of this song senbatsu wear my beautiful and cute seifuku.

365nichi no Kamihikouki became the closing song of this second generation BNK48 debut event. After that, the General Manager of BNK48 reentered the stage and announced a project called BNK48 Campaign. The next surprise came from the announcement of the fourth single BNK48. The title of their new single is Kimi wa Melody.