AKB48 is rumored to be having a new Korean sister group based in Busan South Korea named 'BSN48'. This comes after a Twitter account @BSN48Official announced that they were the first AKB48 sister group in South Korea (21/07/2018). Tweet has succeeded in attracting idol 48 fans from around the world. However, AKB48 itself has not confirmed the truth regarding the account. 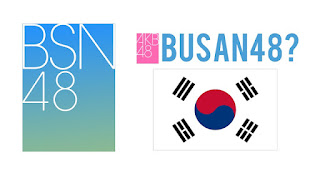 In the tweet written Japanese and Korean letters that make it as if BSN48 is an official group of AKB48. At the end of the word the account informs BSN48 that it will debut on October 25, 2018. They also uploaded a greenish official logo similar to the 48-member group logo in general.

Unfortunately its revealed that the account was made by Pakistani guy, and the BSN48 logo is very unlike the one created by AKS. The 'N' letters in the logo are very different from those in the NMB48, SNH48, BNK48, and MNL48 logos. There, the letter N in the logo is very wide until different with the letters B and S. This is what makes fans consider BSN48 is a bunch of fun people and not the official from AKB48. For more information, we look forward to confirmation from AKB48 itself.