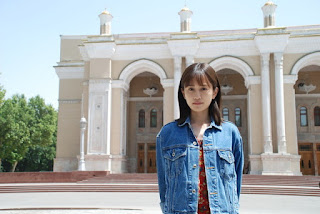 The film is a production work to commemorate the 70th anniversary of the Naboi Theater as well as 25 years of diplomatic relations between Japan and Uzbekistan.

The film tells the story of a journey of a female reporter named Yoko [Maeda Atsuko] who visits Uzbekistan with a Japanese TV variety show crew. Through this visit, Yoko opened up a new world and experienced growth by interacting with local coordinators and people from different cultures. The filming process in Uzbekistan has been started since 30 April and finished on May 29, 2018.

This is the umpteenth time cooperation between Maeda and Kurosawa where they have previously worked together in the 'Seventh Code' in 2014, '1905' which was canceled in 2013 and 'Sanpo Suru Shinryakusha [散 歩 す る 侵略者]' in the year 2017 ago.

On the shooting in Uzbekistan, Maeda recalled, "Before I went to Uzbekistan, I really prepared everything because Uzbekistan is a good place, the people are also very good, even for the first time I think I can survive in a country foreign even though I do not understand the language. "