GNZ48 Zhang Qiongyu to Russia for the World Cup

World Cup 2018 fever was storming members of the idol group SNH48 GROUP. How not, in theater BEJ48 itself has held a fan service event with the theme of FIFA World Cup. 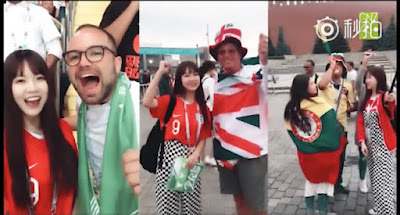 After last June, Li Yuqi and Zhao Yue flew to Russia to watch the Brazil game against Costa Rica, this time there was a member of SNH48's sister group GNZ48 who traveled to Moscow to witness the popular football competition. Qiongyu arrived in Russia on July 3 and the next day she was assigned to watch England's game against Colombia at Moscow's Spartak Stadium.

The girl who is often called Soso is also feel the cheers crowded supporters outside the stadium. She also interacts with supporters from England and Colombia. Soso sat watching the match in the seat area of ​​the British supporters.

Zhang Qiongyu also felt the joy of British supporters or their victory. GNZ48 will announce live schedule in Russia, please stay tuned as she probably to attend the Uruguay v France game on Friday.