July 8, 2018, on the 3rd day of the 'Nogizaka46 6th YEAR BIRTHDAY LIVE' concert held at Meiji Jingu Stadium and Chichibunomiya Rugby Stadium, 2 new tracks will be on the 21st single of Nogizaka46 delivered for the first time in front of fans. 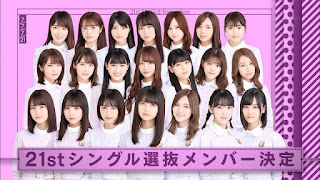 And the second new song is a song that will be sung by the Under Member 21st single with Nakada Kana as Center titled 'Sankaku no Akichi [三角 の 空 き 地]'.