TPE48 is in the brink of crumbling. Even after their short yet great appearance in the 10th World Senbatsu Sousenkyo a few months ago, their future became bleak. Abe Maria, the Team Kaigai member for TPE, returned to Japan after she accomplished her projects in Taipei. 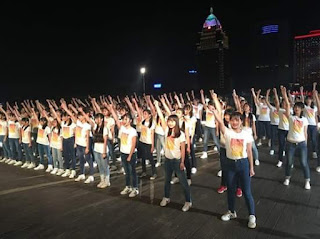 And the girls are in an unknown future. So what went wrong in this 2nd Chinese 48Grp? (I will consider SNH48 as the first one, even they are split with AKB48 after a management haywire).

For starters, TPE48 was announced alongside MNL48 and BNK48 last 2016 during the day 1 of Minami Takahashi's Graduation Concert. It awakened the Taiwanese JMusic Fans' dream of having their own 48grp, much the same as us in Manila and the Thai in Bangkok.

February 4 of this year when they revealed the 1st gen members, alongside Abe. Yasushi Akimoto oversees the revealing, showing interest to the 3rd International Sister Group of AKB48.

Months have gone by and TPE48 is doing their best for their PR, appearing in several TV shows and magazine photoshoots, while BNK is releasing their singles and MNL is still looking for their members.

And, as we know it, several of its members participated in the 10th World Senbatsu Sousenkyo. Some of their members are in the Special World48 Senbatsu (where BNK48's Cherprang is the center).

But problems rose. According to the reports, they were expected to be FULLY debuted on May of this year, but several setbacks came. The company who owned TPE48 allegedly did not pay its staff and the girls' coaches. Half of their employees were sacked with no salary in hand.

They have an estimated total of 3 Million Taiwanese Yuan worth of debts, including the salaries of their staff. They were also allegedly not paying for the venues where the girls are performing. Abe Maria didn't receive any further projects, and the management didn't pay her rent.

Their show, "Taiwan Village," came to a broadcast hiatus for a month, and it was reported that the management didn't pay the production crew the necessary pay. What is worst is that several of its members left their families and abandon their schooling just for TPE48.

They are bound by contract, meaning that they won't have any independent side projects while they were handled by the management. Because of these problems, TPE48 is in the darkest part of the cave.

Then another nail has been put in the coffin: TPE48's website went unaccessable today. A grim proof that are now losing it.

TPE48's hype wast lost. The girls' optimism was slowly diminishing, but they manage to become strong and they didn't let this one go.

The management, XiYue Entertainment (correct me if I am wrong), on the other hand, didn't release any statement regarding the allegations that were pressed against them. The website shutdown was their own "evasive tactic."

I am no businessman to say any tactic that may save the group financially, but in my opinion, I know there is. The only problem is that TPE48 focused too much on PR. Surely, MNL48 can do it, but we can't. We just rely on social media and merch selling. That is it.

And I am pretty sure that their trip to Nagoya for the 10th World SSK adds their financial burden with their expenses including hotel stays. I don't blame them. They want it as much as us here in MNL.

TPE48's problems are managerial, but the effects were saddening. We cannot do anything but to cheer on for the ladies. Hoping that this issue will end. Any solutions are great, but not to the point it is a "band aid solution," or it is temporary.

AKS, and their Taiwanese partners, need to do something, or else, they will be like their famous mangoes if they were not picked and eaten: they will rot.