The idol group that contains this beautiful girl officially kicked off the operation in 2017. Standing as an AKB48 sister group in Japan but in reality they do not follow their sister's popularity. 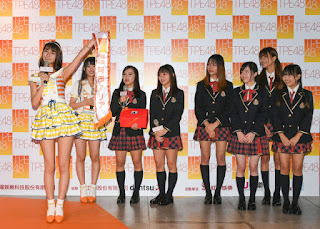 Not only is the popularity a little bit, but also rarely are they invited to perform. On June 15, 2018 the group's financial problems rose to the surface. Even the manager of the company refused to be seen for months. And on July 9 the official TPE48 site was closed for no reason. Abe Maria who is staying as a leader figure also has no income and returned to Japan. Nevertheless, there is no word of dispute and only the group operation is suspended.

The TPE48 problem is increasingly becoming, so they are not considered to be able to survive the idol group industry situation in Taiwan. Only after the idol group S.H.E debuted in 2001, hardly any female idol groups survived.

S.H.E itself has long been successful in its own business, although not yet dissolved, it is difficult to make a group appearance in recent years. Now they are hiatus and have solo careers respectively, even Ella becomes mentor of PRODUCE 101 China. TPE48 is considered not ready to operate even if desperate to start sliding then it will be problematic and there is something surprising later.

Meanwhile, the weakness of the entertainment industry in Taiwan has become one of the contributing factors. Since and the internet, although it can not be said to collapse overall, but it is difficult to return to success and can only go down.

The album sales are no longer done, the singers leave for mainland China (china mainland / RRT) to earn money and popularity. If they stay in Taiwan, they will lose their market. Therefore, Taiwanese companies or entertainment agencies send many artists to China including in PRODUCE 101 China event.

If TPE48 does the same thing, they will not get attention because there is already AKB48 Team SH and SNH48 Group. Weibo remi TPE48 was not able to get followers of more than 10,000 although it has been opened for a long time. In contrast to CKG48 operating in 2017 they already have a followers of more than 30,000 people. SNH48 GROUP's original song is now original, AKB48's song may not be accepted either because SNH48 already has it and is popular with it.

While auditing the first generation there were a lot of protests against TPE48. Starting from a bad live broadcast and unknown selection criteria. After being elected, many members refused to contract with the company (out of 46 members who received only 41 were announced.Even the official Youtube channel TPE48 has only 8,000 subscribers in 10 months, of which TPE48 is considered not to have a long life. survive this situation? Will they be dissolved in the next 2 years? Can they survive like their sisters abroad where JKT48 will enter the seventh year?