The member scandal came back to the public, a time came from one of the AKB48 sister group members in Shanghai AKB48 Team SH. Just after the first generation was announced last week, this girl named Zhao Ziwen was reportedly still in a relationship with her boyfriend. This was strongly criticized by AKB48 fans there with their current status as Team SH members. 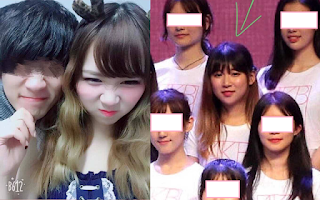 Through one of the group 48 gossip accounts in China, they revealed a screenshot of the results of the chat between the two. As a result this got the attention of net citizens there and said that this could not be forgiven. Some netizens also urged Ziwen to leave AKB48 Team SH.

Ziwen's photo with her boyfriend was also spread by the gossip account and they were both very intimate. Some speculation that the photo appeared was recently taken because Ziwen's hair was photographed while wearing the AKB48 Team SH shirt was the same. Meanwhile fans are still curious whether the official profile will be uploaded or not later.