Fans says only know SNH48 not AKB48, this savage answer by SGO48

An interesting comment was expressed by one of the people of Vitenam on the SGO48 Facebook page. Because the comment he wrote is a bit offensive to AKB48's former sister group, SNH48 in China. SGO48 itself is the AKB48 sister group based in Ho Chi Minh City, Vietnam. Although a bit sensitive, the SGO48 official page answered the question.

This Facebook account named Lê Trung Hiếu commented "Mình ko biết akb48, mình chỉ biết snh48 thôi". If translated into English, the sentence means "I'm dont know what AKB48 is, I only know SNH48". Suddenly this comment is the most rewarded and makes it at the top. SGO48 did not miss the comment. 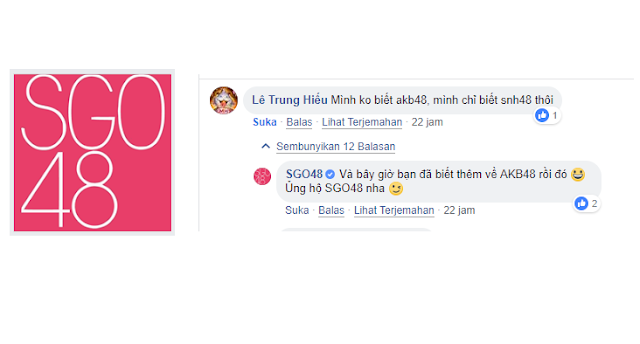 "Và bây giờ bạn ế biết thêm về AKB48 rồi ó: D Ủng hộ SGO48 nha;)", replied SGO48. If translated this sentence means "Now you will know more about AKB48, support SGO48". There are also other fans who try to explain that SNH48 is no longer associated with original 48 Group. And the person replies "it's not important I'm a fan of SNH48".