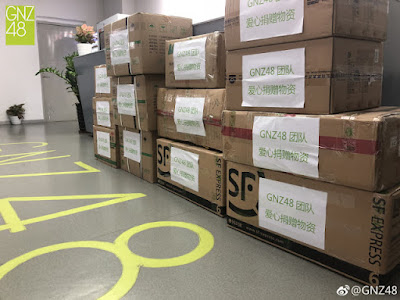 Bad news came from Shandong China, a huge flood hit the eastern part of the province. The area known as the agricultural producer has now suffered severe damage from the tropical storm Yagi and Rumbia earlier this month. The death toll reached 13 people and 3 other people were declared missing. As many as 173,500 people have been displaced from the city and the total losses reached 10 billion Yuan.

Floods arise due to human error, this is caused by the error in the amount of water released by the reservoir. In Shangkuang Shouguang city, one of the areas worst hit by the floods, residents were warned about the release of water from the reservoir on August 19. The amount of water planned to be released is 300 cubic meters, then it was revised to 800, 1,700 and last 2000. This error was caused by improper weather forecast.

This disaster caused Guangzhou based idol group to be moved to help those who affected in Shandong. Today, through the GNZ48 Weibo account informs that all members and staff have been mobilizing assistance for refugees and victims. GNZ48 hopes that the victims will soon go through this difficult period. Donations will be sent tomorrow to the refuge.