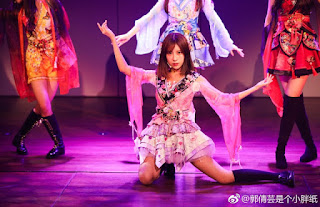 SNH48 member from Team NII, Guo Qianyun to leave the group. SNH48's 8th generation member announced her departure from the group on August 25, 2018 through her personal Weibo account. She also wrote a few sentences for farewell to the fans.

"Thank you very much to everyone who grew up with me, thank you all, this is not an end, this is the beginning. There are many reasons for this departure, but it doesn't matter, let's work together later. More effort, I believe one day we can shine! Hello everyone, I'm Guo Qianyun. I hope to see you at a later time ~ ", he wrote.

She also thanked the NII Team members who had noticed it. Her teammate Jin Yingyue also had time to reply to the post. With a cry of tears she responded to Qianyun's exit.