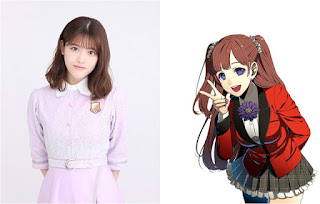 Nogizaka46 member Matsumuri Sayuri will appear in the drama 'Kakegurui season 2 [賭 ケ グ ル イ season2] which will air on SBM and TBS in the spring of 2019.

'Kakegurui season 2' is the second volume of the drama adapted from Kawamoto Homura and Naomura Toru's 'Kakegurui [賭 ケ グ ル イ]' manga. Tells about the life of a school where the students' caste is determined by a series of games.

In this drama, Matsumura will act as Yumemite Yumemi, a public relations official in the Student Council who dreams of becoming a shining Idol and winning Academy Awards in Hollywood. Yumemi has a double-faced personality. On the one hand she is the figure of a sweet and beautiful girl who loves the fans. However, in reality she is an arrogant person and disgusted with her fans.

Regarding the selection of Matsumura to portray this character, the director Hanabusa Tsutomo who also directed the film 'Asahinagu [あ さ ひ な ぐ]' commented 'When reading the script and thinking about the characters, there was no other figure that crossed my mind to portray Yumemite's Yumemite other than this girl. (Matsumura)! I have planned to offer Matsmura-san to play in this drama. My wish a year ago is now a reality. "