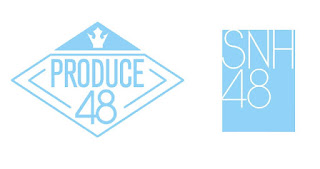 The popular survival event PRODUCE 48 by Mnet is indeed popular with KPOP lovers from various parts of the world. This program also successfully formed and debuted 12 members in a girl group called 'IZ*ONE'.

Followed by 96 trainees consisting of Japanese and Korean made many unique and special features compared to the original PRODUCE 101 program.

46 trainees came from AKB48 GROUP in Japan, followed by AKB48, SKE48, NMB48, HKT48, and NGT48. In this event the trainee from Japan experienced a significant difference in idol culture.

There are also differences in Japanese and Korean culture that were apparent in this program. If Korea and Japan were mixed in this event, what about China? China and Korea are also very close neighbors.

Like Japan, the two have a fairly close historical relationship. Then what about the world of the meeting in both countries? What if these two cultures were blended in the same survival event, PRODUCE 48?

If in Japan they have AKB48 GROUP, in China there is also an idol group 48 that develops with their CPOP music, 'SNH48 GROUP'. SNH48 GROUP is an idol group consisting of SNH48 (Shanghai), BEJ48 (Beijing), GNZ48 (Guangzhou), and CKG48 (Chongqing).

The following is an illustration if SNH48 GROUP was offered by Mnet to make a second season 48 PRODUCE! SNH48 GROUP has many beautiful members with their typical Chinese faces.

All SNH48 GROUP members are Chinese and Taiwanese citizens. Many grilband or boy band trainees from China also successfully debuted in South Korea.

7SENSES is a sub unit of SNH48 which has debuted in South Korea. Surely they also have members who are loved by KPOP lovers there. Even one of its members, Xu Jiaqi or Kiki, has quite a high popularity and often treds on several social media and the internet in South Korea.

Kiki was even rejected as a trainee from SM Entertainment! It must be very exciting if Xu Jiaqi is in PRODUCE 48 against Korean trainees right? SNH48 GROUP is the same as AKB48 GROUP has their own unique music.

Although SNH48 used to be part of AKB48 but now they have original songs that are no less good like Princess's Cloak, Dawn in Naples, Endless Story, Dream Land, etc. Their original theater sub song unit is also no less interesting if it is displayed on the PRODUCE 48 assessment stage.

Even though the members themselves are idols, they certainly have idols that he admires. Many SNH48 members idolize South Korean idols.

Yuan Yiqi SNH48 for example he is a fan of the BLACKPINK girl band who had been to Macau to watch a concert. During theater performances, SNH48 personnel also often do dance covers of South Korean idol songs.

The original SNH48 songs are now in the hundreds. Some of them even have KPOP genre music. These songs, for example, are Xiadong Ri's Team HII, Ready Go !. In creating a number of songs SNH48 hooked composers and lyricists from South Korea