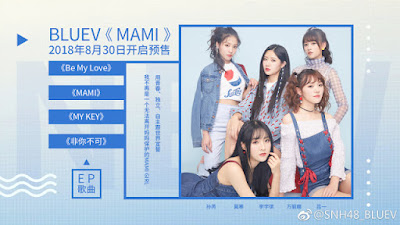 Previously SNH48 had announced that they are going to debut with the HO2 sub unit at the Mixing Room, the Shanghai Mercedes Benz Arena. Today, their debut concert schedule has been revealed, precisely on September 7, 2018.

To welcome this concert, SNH48 prepared a single titled MAMI. The debut EP single will start pre-order on August 30th. MAMI's own song will have the concept of sporting American teenagers in closing the summer.

Besides MAMI, there are three songs, namely My Key, Feini Buke, and Be My Love. These four BlueV songs express a form of hope for the freedom of adolescents so they do not get the nickname as 'mami child' anymore. They expressed hope that parents will stop worrying about themselves and believe that their children are quite independent.