Home JKT48 After 7 years, JKT48 to finally gets their first original SONG

After 7 years, JKT48 to finally gets their first original SONG 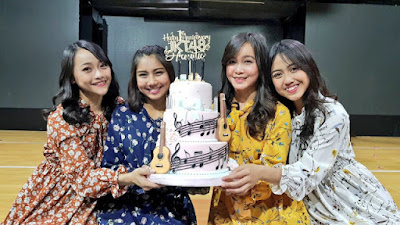 The one year anniversary celebration of the formation of the JKT48 Acoustic subunit was held at a special theater performance on September 11, 2018 last night.

All fans who came to watch were satisfied with the appearance of JKT48 Acoustic consisting of four members, Rona, Sisca, Nadila, and Aurel.

In the show that night, fans were very surprised by the performance in the song named 'Lantang'.

If the sub unit usually performs JKT48 songs or covers other singer songs, Lantang was created by themselves and JKT48's first original song. Both fans who attended and not, their waiting for the original song finally paid off.

Lantang song itself is a special song written by four members of JKT48 Acoustic, NOT Yasushi Akimoto and it's NOT a main-single will probably included in 20th single as Coupling Song.

One of the fans who watched the song's performance said that the lyrics contained curses from their members. Interestingly, there was a rap section on Lantang's song lyrics that made JKT48 fans even more curious.

In the special Acoustic show, JKT48 also stated that the song Lantang will be uploaded on their official Youtube channel. Additionally, JKT48 Acoustic will have other original songs that will be created with the result of collaboration with an Indonesian music artist named Alam Urbach. His famous song, one of which is 'You Are' sung by Isyana Sarasvati.