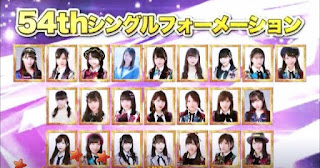 The 23 members were chosen as the Senbatsu single 'NO WAY MAN' with HKT48 member Miyawaki Sakura positioned as a center.

This single will also be the last single member of AKB48 Team B Takeuchi Miyu who has announced her graduation from the group.

Honda Hitomi, Miyawaki Sakura and Yabuki Nako will be suspending their activities with AKB48 Group for two years and six months until April 2021 to concentrate on activities with the global idol group, IZONE.