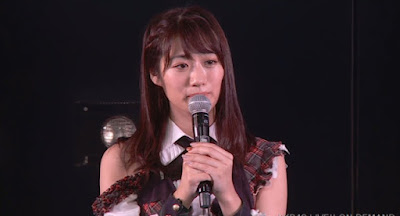 AKB48 member Fujita Nana has announced her graduation from the group. This was announced by Fujita during the Team K 'RESET' theater performance which was held September 29, 2018.

Through the blog, Fujita wrote, "I announced that my graduation from AKB48 was performed by a theater that was held today."

Fujita further wrote, "There are many things I've been through while in AKB48 both sad and fun things."

Regarding her graduation, Fujita explained, "I have thought about my graduation several times, but I thought" what I left before graduating from AKB48 ", this made me dare not move."

Fujita further explained, "In May, I was involved in the 'Romeo & Juliette' stage play, and the show went smoothly. I had a dream," I want to stand on stage as an actress ". Even though I was given several times to appear in other stage plays, but through the stage play 'Romeo & Juliette' I feel I have contributed a little to AKB48, and at the same time I thought "There is nothing left for me to do at AKB48". "

Regarding the future, Fujita revealed, "Even though I have graduated from AKB48, I will continue to stand on stage (stage play) and I will go out and meet the fans again. So now don't worry, I want us to have fun as long as I play as an idol. "

Fujita Nana joined AKB48 in 2010 as Generation 10. Promoted to Team Unknown in June 2012 and transferred to Team K during Tokyo Dome Team Shufflle in August 2012. Two years later Fujita was transferred to Team A when AKB48 Group Daisokaku Matsuri was held in February 2014 and she returned as a Team K member when AKB48 Spring Shuffle 2015 in March 2015 to date.