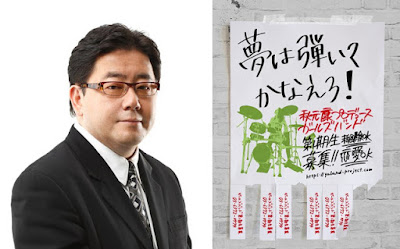 Producer of AKB48 Group, Sakamichi Series and others, Akimoto Yasushi will start the "Girl Band Proyect" with Warner Music Japan which also houses big artists such as TWICE and Kyary Pamyu Pamyu.

Unlike female bands in general, for this female band project "Senbatsu (Election) Member System" will be applied for each song that allows several members to register for every musical instrument such as guitar, bass, drums, vocals and keyboards.

And with "Success Cinderella Band Story", this women's band journey is like a training process, the Senbatsu process and others will be visualized through various media to be followed by fans.

The acceptance of the first stage audition application starts today, September 4 with the requirements of girls aged 12 years to 19 years max (as of the end of March 2019) with no musical experience and musical instruments required.

The first stage of the review process is until October 31, the second stage is from November 23 ~ December 2, and the final stage is in mid-December. And on December 23rd at Zepp Tokyo, members and band names will be announced.

The women's band is planned to debut in spring 2019.