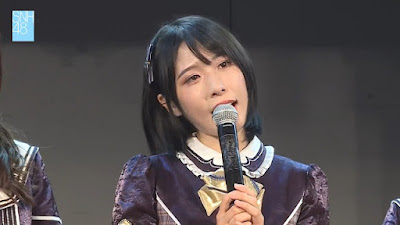 The NII Team's 'On behalf of Love / Yi'ai zhi Ming' theatrical performance on Sunday 23 September 2018 ended with the tears of the members.

One member of the NII Team, Liu Peixin, revealed that the day was the last day of her theater performance as a member of SNH48. This made the viewers who were saddened by her graduation.

She was one of the popular members at the beginning of his appearance because she twice won positions in the second and third elections of SNH48.

The girl who often called Beixin had previously announced her graduation on July 15, 2018. She admitted that her experience at SNH48 for 4 years was enough. The following is the moment when Liu Peixin prostrated gratitude at the Star Dream Theater stage.