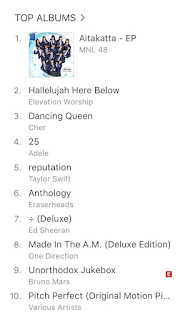 The whole MNL48 group is happy, because their debut single Gustong Makita aka Aitakatta has successfully penetrated the top of the Philippines' iTunes music platform.

Even though the Aitakatta single was only released yesterday. This achievement is very good for the development of the MNL48 group in the future considering this is first single.

Today, Gustong Makita's single occupies the top 10 album on iTunes Philippines after 12 hours. Then shortly ranked third best and to date is # 1. Aitakatta MNL48 was able to defeat albums of foreign musicians such as One Direction and Taylor Swift.

Although doubtful because of its not so popular appearance, MNL48 was able to prove its existence and is ready to master the Philippine music industry fans says it will be the last on top chart because of Pinoy Kpop fans that wonder and curious about MNL48 songs.