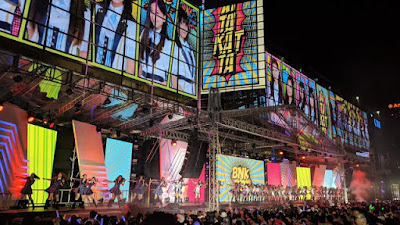 BNK48 successfully held its second concert '1st2gether' on September 15, 2018 at Central World, Bangkok. This concert was attended by 52 BNK48 members from the first and second generation.

With the largest LED combination in Asia at the concert site, this concert is more interesting.

In this concert, the fourth single Kimi wa Melody was performed for the first time. Besides that the rain that had dropped did not dampen the enthusiasm of the fans present to keep watching.

The members who appear also don't lypsinc from the beginning to the end of the song. This concert was broadcasted live via BNK48 official Facebook.

The concert was opened by two MCs, followed by the BNK48 version of Overture. Furthermore, the first generation appeared on stage carrying two songs "BNK48 (Bangkok48)" and Aitakatta made the first costume of Aitakatta's single.

Enter the unit song, the Thai version of Temodemo no Namida for the first time hosted by Cherprang and Music in Thailand. Previously, the two members had performed at AKB48 concerts in Japan. After that, Song Skirt, Hirari is shown first by seven generation two members.

The RIVER song was also performed at this concert by senbatsu members in the usual uniform.

With a complete formation, BNK48 performed the Sakura no Hanabiratachi song nicely. The video of the selection of the senbatsu single Kimi wa Melody by management played on the giant LED was connected to the first appearance of the fourth single by the senbatsu.

The first song of the second generation Tsugi no Season was also delivered after Kimi wa Melody. The new song from Yume e no Route's fourth single was also premiered at this concert.

As BNK48 announced, video music will be released along with the concert. Kimi wa Melody's music video was screened for the first time in Asia's biggest LED.

In the music video, the senbatsu wore two types of uniforms, namely white dresses with green patterns and typical Thai traditional royal clothes, but with attractive colors. This traditional dress was exhibited to the fans after video music playback.

After the exhibition as late as before, Izuta Rina, a member of the shipment from AKB48, showed off her Thai language skills to fans by doing MCs with other members.

Then followed by Shonichi's song performance by all members with a special T-shirt for the BNK48 member audition number. On that occasion, Mobile from BIII Team announced that she would go to Japan for one month starting tomorrow. There she will be with Stefi JKT48 to attend a program to study Japan.

Koisuru Fortune Cookie song was the closing of the concert that night. Kimi wa Melody's music video was released and watched on the BNK48 Youtube channel. Thousands of spectators who watched this concert were very happy when the concert was closed by the MC.