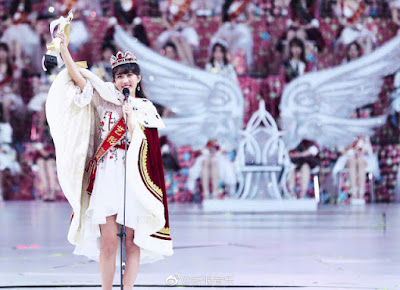 As per the promise that was written previously on the site of the SNH48 senbatsu selection this year that the champion would later get the release of a solo single.

Sousenkyo was held last July and Li Yitong officially became the queen of elections in 2018 to shift the position of TOP 1 Ju Jingyi who had graduated.

SNH48 apparently will keep its promise that is a gift of a solo single for Li Yitong. It is known that after Shanghai Siba (STAR48) registered four songs with the singer registered 'SNH48 Li Yitong'.

The four songs are rumored to be filling out EP solo single Li Yitong. Two of the songs were SNH48 songs that won at the Request Time and sung by Yitong.

The song is Mu'ou which is the song of the NII Team 'Exclusive Party / Zhuansu Paidui' setlist unit. This year's TOP 4 Request Time song 'Renjian Guize' from Team XII's 'Code / Daihao XII' setlist which Li Yitong brought will also be on the EP later.

Two other songs are new songs specially created for Li Yitong. The song is titled 'Like A Star' and 'Na Hao Ba (那 好吧)' which means 'Okay then'. Both songs will have more than 3 minutes in duration. The possibility of this EP will be released along with the sousenkyo single.