Awkward Wang Jiongyi cancel her graduation and return to GNZ48

A few months ago, Wang Jiongyi, a member of the first generation GNZ48 Team Z, announced her graduation from the group on the grounds that she wanted to focus on study. After some time she gave the news that she would return to GNZ48 through personal account. Sure enough, not long from there, Wang Jiongyi came to the GNZ48 theater. 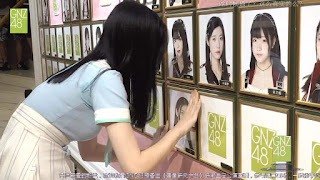 GNZ48 management allows Jiongyi to re-install the Kabesha on the theater wall. Management gave the conditions, Wang Jiongyi could enter Team Z again after she took part in a theater performance as many as 10 trainees.

Today was a special revival of Team G and Z. It was announced that Wang Jiongyi was promoted back to Team Z after passing the trainee period. Valid after national holiday day.