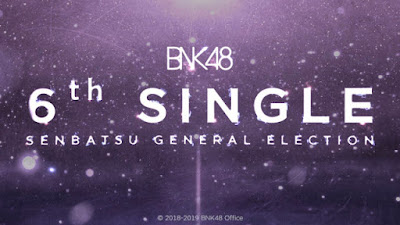 Successfully got a seat on AKB48 53rd Single World General Election, now BNK48 is ready to hold its own election event. The announcement of BNK48's first sousenkyo event was held on the 2-shot album RIVER (29/09/2018). The election campaign was conducted to select senbatsu members for their sixth single.

Sousenkyo or General Election is AKB48's annual event that is so popular in Japan. The event was held to select 16 senbatsu members of fans choice through voting rights.

With the concept of 'SENBATSU MEMBERS will be chosen by YOU', this election event will be held on January 29, 2019 at Impact Arena Muang Thong Thani, Bangkok, Thailand. The contested position is 16 senbatsu seats only. The card will be included in the fifth BNK48 'BNK Festival' single.