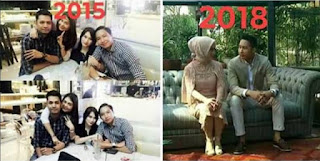 Melody ex JKT48 is rumored to be getting married soon this year after pre wedding photos with her boyfriend circulating outside on social media.

This became a new polemic for fans because she had just graduated six months from the group that raised her name. Various kinds of pros and cons about this marriage came from various parties. One of the things that is a problem is whether Melody is dating when she is still a JKT48 member?


JKT48 fans must be familiar with the contributions that every member must adhere to. One of them is the golden rule of 'golden rules' where members are not allowed to date. Fans thought that Melody had violated the golden rules itself and called her a traitor coward because she could only date after graduation, was it possible to get married immediately? Marrying a short time or not dating may be familiar to Indonesians, but a photo of the Melody scandal circulated in 2015 with the same man she wanted to be husband.

The photo above shows Melody with a man and two friends. The man who was holding hand by Melody was the same as the man who would marry her. The left photo was viral in 2015 and at that time she was still a JKT48 member.