Two twin members from SHY48, Liu Jiao and Liu Na announced their graduation from the group. Both conveyed this in the performance of the SIII Team 'Idol.S', yesterday. Their last theater performance was on the same day. 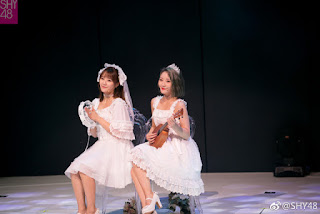 Liu Jiao some time before the show had coded that she would leave the group that raised her name. "2017 is nice to meet you, 2018 nice to have you", she wrote on October 1, 2018. 2017 was the first time SHY48 debuted at Request Time SNH48 and the first generation was announced. She's writing on Weibo and is the last post she has uploaded until now.

Liu Jiao and Liu Na were the first twin sisters at SNH48 GROUP and SHY48. Since its appearance, one of the fans is no stranger to both and their acrobatic action video on a TV show before joining the group uploaded to social media. However, at present the management has not yet decided the end of their membership in the group.